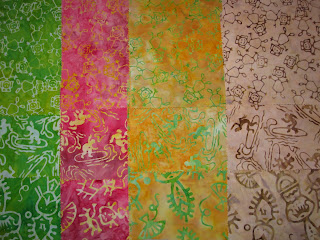 Can you believe this is my 100th post?  Amazes me.  That and I have 75 followers - wow!! So I'm having a give away.  I have an adorable layer cake - summer vacation, there are 2 squares of each.  Are the kids on those blocks not the cutest?  I just love the little girl.   If you would like to win this layer cake just leave a comment and you'll be in the running.    I'll pick a random number on Friday and announce the win.  I do appreciate all your support and comments.  It certainly has made me a better quilter! 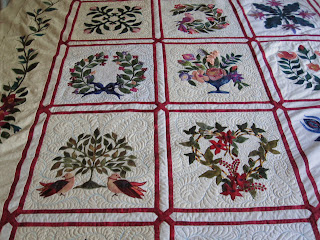 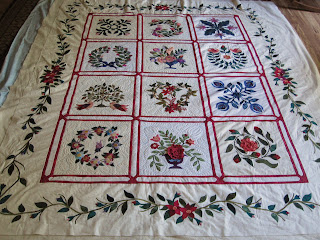 And speaking of quilting.  I FINALLY started quilting the Baltimore Album quilt.  I was suppose to have it completed by the end of June for Myra's PhD (projects half done) Challenge, but this one just won't make it.  I was so terrified to get those first stitches going.  I have been practicing my feathers for six months specifically to get this particular one quilted.  I got it sandwiched and it stayed that way for 2 weeks.  I just didn't know what I was going to do.  I knew I wanted feathers, but now that it was sandwiched I looked and said "yikes, how do I put feathers on that????" and I knew I wanted some McTavishing, that was the easy part.  I even put a whole quilt together, quilted, binding done and cut another one before I made myself start sewing.  Once I got the first few stitches in, all was good in my quilting world again.    It was just those first few stitches.  I'm doing twirly feathers around the outside and McTavishing any where a feather won't fit!  I'm pretty pleased with it so far.  I have 8 blocks done; 4 blocks, the borders and sashing to go.   It won't be done by the end of June deadline, but hopefully not to long after that.  Here's what I have so far.  My feathers didn't look anything like that 6 months ago.  Really all it takes is a little practice and you can put a feather just about anywhere! 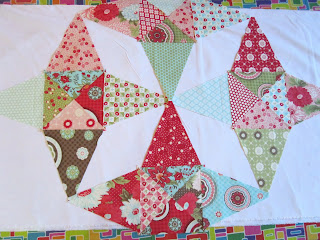 One more project started (my list on in progress projects was just way to small;) I start the Kaleidoscope QAL  I've never done one of these before, so I'm pretty excited.  We got the templates and cutting instructions this week.  I'm using the Moda Bliss fabrics.    A little undesided about the totally scrappy look, I may need to pair up some colors for a little more control.  I"m trying to deal with the control issues, but I think I did that with the suebobsquarepants quilt which you can see here 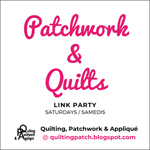